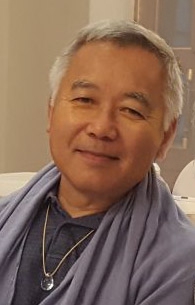 Stephen Quong (spiritual name Umananda) has studied and practiced astrology in Asia, Europe, and North America since 1970. In the 1970's and 80's he travelled extensively throughout India, Nepal, and Sri Lanka, studying with many of the most accomplished contemporary masters of Vedic Astrology and Palmistry.

In addition to his astrological studies, he came into close personal contact with many of the great sages and saints of the Far East, whose spiritual teachings, grace, and personal example have been a major influence in his life and work.

In February 1982 he was formally initiated as a disciple of Sri Ma Anandamayi in Brindavan, India, and to the present day she remains his primary spiritual teacher, inspiration, and ideal.

Before resuming a full-time astrology practice in 1991, Stephen Quong worked as a stockbroker and financial consultant for an international investment company (Dean Witter Reynolds, 1987-91), as a public policy and budget analyst (County government of Santa Cruz, California, 1982-87), in the administration of the Chemistry Department at the University of California at Berkeley (1979-81), and as the editorial director of a publisher of books on spiritual topics, Summit Press (1975-78).

He has authored and published numerous articles in the fields of astrology, spiritual culture, and environmental health, as well as composing devotional poetry and music. His experience and expertise in the fields of business, finance, marketing, executive management, politics, publishing, and law, provide a unique complement to his spiritual interests and pursuits, and add a special dimension to his astrological consultations.

In April, 1989 he established The Mount Shasta Foundation, for the purpose of promoting spiritual culture in America. Under his guidance, the foundation sponsored the visits of many prominent spiritual teachers, healers, and musicians to the holy mountain of Mount Shasta and to the San Francisco Bay Area.

In 1993 he was nominated by his astrologer teacher and noted savant, Dr. B.V. Raman, to be a Life Fellow of the Indian Council of Astrological Science, the world's largest and most prestigious institution promoting Vedic astrology. The title of Life Fellow is the highest honor bestowed by this organization, and Stephen was the only American-based Vedic Astrologer to be so honored with this title. The ICAS has also awarded him the honorary title of Jyotisha Kovida ("Knower of Astrology") in 1993, and Jyotisha Vachaspati ("Professor of Astrology") in 1996, at the Second All-India Conference on Astrology in Bangalore, India. He has appeared on numerous television and radio shows, and delivered lectures on Vedic Astrology and related subjects at international conferences, temples, ashrams, yoga schools, and spiritual centers around the world.

In late 2000, Stephen was invited to be a Founding Member of the Planetary Gemologist Association (based in Bangkok, Thailand), and became one of the world's first certified Planetary Gem Advisors. He teaches courses on the esoteric uses of crystals and gemstones for self-healing and spiritual awakening, and is the sole American agent for Astral Gemstone Talismans, the premier designer of spiritual jewelry inspired by Vedic themes.

In February 2001, Stephen was invited to Penang, Malaysia to teach a 7-day intensive course on Vedic Astrology to the most advanced Feng Shui students of Dr. Jes T.Y. Lim, founder and director of the Qi-Mag International Feng Shui and Geobiology Institute, the world's largest school of Feng Shui. Stephen is a certified Qi-Mag Feng Shui Consultant and Instructor, and was given the title of Master of Tao Geomancy in February 2008 by Dr. Lim.

In April 2003 he was certified as a Mastery Level Practitioner of the Yuen Method of Chinese Energetics, taught by the internationally renowned Grandmaster of Shaolin Martial Arts and legendary healer, Dr. Kam Yuen.

In January 2006, he was certified as a Level 1 Instructor of Qinway Qigong by Master Qinyin, one of the leading contemporary Taoist mystics and teacher of a highly respected and effective form of spiritual Qigong.

In February 2008, he received the Abhisheka, Dharma Instruments, and spiritual authorization to teach the Medicine Buddha Dharma, from the patriarch and Grandmaster of the Hanmi Esoteric School, Dechan Jueren (also known as Master Yu Tian Jian). In April 2008 he was given the title of Vajra Guru and Abbot of the Dari Rulai Purity Temple of Northern California (which is yet to be established).

On 5 August 2012 he received the honorary title of Jyotisha Mahasagara (Great Ocean of Astrological Knowledge) from the Raman & Rajeswari Research Foundation, based in Bangalore, India.

In November 2012 and again in November 2013, he met the Grandmaster of Shamanic Healing, Sayagyi Dr. U Shein in Yangon, Myanmar, and received a Dharma transmission for spiritual healing in the Buddhist Nath tradition.

For more than 20 years he has been a special guest lecturer on the topic of "Astrology, Yoga, and Spirituality" at the Sivananda Yoga Vedanta Centers in Europe, Canada, Bahamas, Vietnam, and the USA, and provided private consultations and advice to clients from around the world.

More recently, in September 2017 he became a Certified Instructor of Tao Geomancy (Level 1); and in 2018 was certified as a "Level 5 Senior Master of Tao Geomancy", with the mandate to share this knowledge worldwide.

In October 2017, he was invited to be a guest speaker at the annual "Radionics as Taught by the Master Symposium" in Rapid City, South Dakota.

In July 2018 he was invited to be a guest speaker at the "US Psychotronics Association Annual Conference" in the Chicago area. His presentation was on the use of "Maha Mantras in Radionics".

Please read the autobiographical article On the Path for more information about Stephen's background and life orientation.

To make an appointment for a personal consultation, please call (925) 754-8858 during business hours Pacific Time, or email: smquong@gmail.com